She also appealed to the Volta Regional Directorate of Health to deploy nurses to Lawoshime to man the CHPS compound which has been abandoned since it was commissioned years ago. 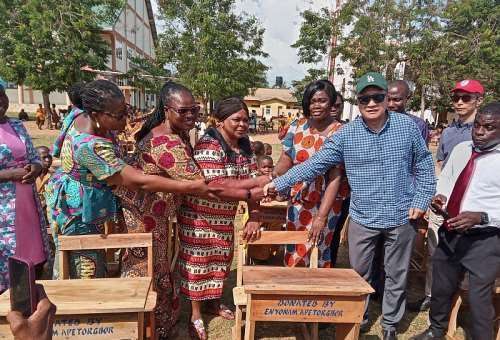 An educationist and philanthropist, Madam Enyonam Afetorgbor, has donated 630 mono classroom desks to some selected basic schools in the Keta municipality of the Volta region.

The desks worth GHC 201,000.00, were donated through her NGO, Keta Education Fund (KEF) as part of efforts to support deprived schools and to aid academic work within the municipality.

At a ceremony to present the desks and officially launch the Keta Education Fund (KEF) at Abor near Akatsi, Madam Apetorgbor said her decision to donate the desks was informed by the falling standard of education in the municipality due to poor infrastructure in the affected schools where school children sat on the bare floor to take lessons.

She said the Keta Education Fund (KEF) is a private initiative with a specific objective of addressing critical infrastructural needs of schools in the municipality.

Madam Apetorgbor bemoaned the unavailability of electricity in some communities such as Lawoshime, Agorvinu, Hagodzi and Mamime, a situation which she observed discourages teachers from accepting postings to these areas. She called on the authorities to ensure that electricity is extended to these communities.

She said the Keta Education Fund (KEF) is committed to ensuring that school children in the municipality are comfortable in their classrooms so as to make teaching and learning easier.

Madam Apetorgbor noted the poor state of teaching and learning facilities in the schools and pledged her resolve to intervene through collaboration with the partners of the Keta Education Fund (KEF).

The philanthropist appealed to the government to construct a feeder road to link Hatorgodo, Lawoshime, Mamime, Hagodzi and Agorvinu communities and also extend electricity to communities beyond the river, calling on corporate organisations and other well-meaning individuals to support her to fix the foot bridges in these communities to aid the school children to cross over safely to school instead of having to walk through the water to and from school each day posing a health risk to them.

She also appealed to the Volta Regional Directorate of Health to deploy nurses to Lawoshime to man the CHPS compound which has been abandoned since it was commissioned years ago.

Municipal Chief Executive for Keta, Emmanuel Gemegah, who received the desks expressed the municipality’s gratitude to the philanthropist and her NGO for the kind donation which he says would reduce the existing deficit and also help in increasing enrolment in schools in the municipality.

The MCE observed the growing decline in education in the municipality in recent times and urged pupils/students in all schools in the area to study hard in order to reverse the trend.

Gemegah called on teachers and students of the beneficiary schools to ensure that they took maximum care of the desks so as not to defeat the purpose for which they were donated.