When sitting resumed today, Superintendent of Immigration, David Essien, the second prosecution witness under cross examination, said when Aisha’s passport was examined by the Ghana Immigration Service (GIS) in the year 2017, the Service realised that Aisha had been granted an indefinite resident permit 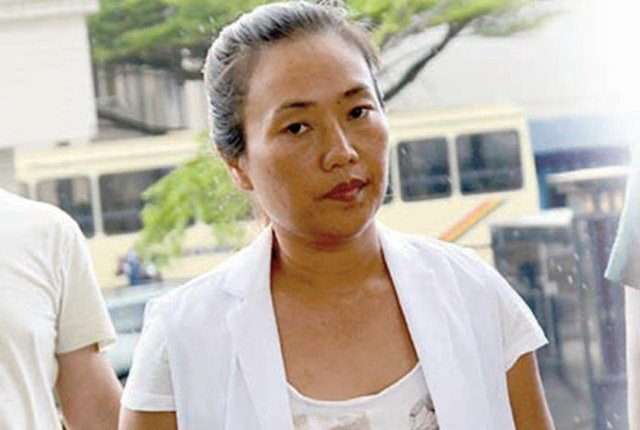 There was drama at an Accra High Court when En Huang, aka Aisha Huang, an alleged illegal miner, informed the court that she did not understand the interpretation done by an Interpreter from the Ghana Institute of Languages.

Meanwhile, the Interpreter earlier did interpretation when the State called its first prosecution.

The court presided over by Mrs Justice Lydia Osei Marfo said since there was a Chinese interpreter from the Ghana Police Service in court, it would rely on him

The interpreter from the Ghana Police Service, Edward Joseph Yawson, was then sworn in to do the interpretation.

When Mr Yawson commenced with interpretation, Aisha then nodded in agreement.

When sitting resumed today, Superintendent of Immigration, David Essien, the second prosecution witness under cross examination, said when Aisha’s passport was examined by the Ghana Immigration Service (GIS) in the year 2017, the Service realised that Aisha had been granted an indefinite resident permit.

According to the witness, the said permit was granted based on Aisha’s “supposed marriage to a Ghanaian known as Anthony Fabien”.

However, Supt. Essien informed the court that, investigations conducted by the GIS established that Aisha used forged marriage certificate and forged Ghana Passport in support of her application for the indefinite residence permit.

The witness under cross-examination by Capt. Nkrabeah Effah Dartey said it was based on that, that the Comptroller General, GIS, revoked Aisha’s indefinite resident permit.

He said the resident permit was revoked on the grounds of fraudulent misrepresentation in accordance with Immigration Act, Act 573, which also led to the repatriation of Aisha in the year 2018.

Led in evidence by Mrs Yvonne Atakora Obuobisa, the Director of Public Prosecution, the second prosecution witness in his evidence in chief, admitted knowing Aisha Huang and that on October 24, this year, he had presented a witness statement and same was filed for him on October 25, this year.

The witness told the court that he was stationed at the GIS Kumasi office, and he had worked with the Service for nine years.

“I have an encounter with the accused person on August 24, 2016, when there was a publication on August 24, 2016, with the headline, ‘Tension mounts at Amansie Central over Chinese Galamasey. ’”
The second prosecution witness said in the said publications, there were several accusations against Aisha at Bepotenten in the Amansie Central District indicating that Aisha had encroached lands, including cocoa farms and that her activities had led to the drowning of about six children.

The Director of Public Prosecution (DPP) prayed the court to admit the publication evidence on the grounds that the witness was an investigator of GIS and during investigations he gathered materials relevant to the charges.

The court overruled the objection raised by the defence counsel and admitted the publication in evidence saying it was relevant.

“The admissibility of the document is one thing and the weight to be put on is another,” the court ruled.

Continuing with his evidence in chief, the witness said when the activities of Aisha came to his attention, he was tasked by his Regional Commander to invite Aisha to the office.

The witness said he was also tasked to investigate her immigration status and the situation on the ground.

He said Aisha was invited to the office and her statement was taken.

The witness said later some GIS officials nabbed some Chinese at Bepotenten and one Gao Jun Chen informed them that their passports were with Aisha.

He said on May 7, 2017, Aisha and other Chinese nationals were referred to Accra for further investigations.

Aisha s standing trial for undertaking mining operation without License at Bepotenten and facilitating participation of persons engaged in mining.

She is additionally being held over illegal employment of foreign nationals and entering Ghana while prohibited from re-entry.
Aisha has denied the charges.

What is the Position of Haruna Iddrisu and Ato Forson on this Subject Matter of Conflict of interest?: Razak Kojo Opoku Writes