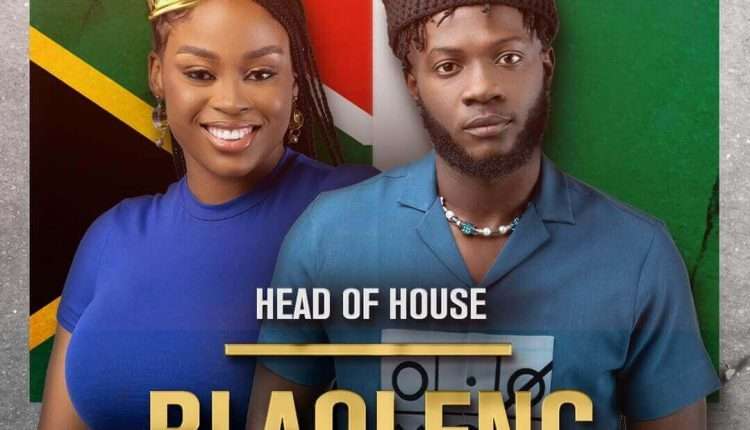 Week two in the Big Brother Titans house turned out to be a key week to level out the ratio of cliques and rivalries, with Biggie adding a new twist where housemates had to form duos before taking part in the Head of House games – and then being nominated for eviction as a duo.

Vying for the grand prize of US$100,000, Blaqboi & Ipeleng (Blaqleng) came out tops as their strategy and pace were tested as a pair during this week’s challenge.

How did it work? Housemates had to pick a card with the name of the opposite gender and nationality. The content of the card ultimately carried the name of the housemate they would be paired with throughout the show and compete with for the HoH privilege.

During the first round, male housemates played the “junk in the trunk” game, shaking out ping-pong balls in a tissue box placed around their waists. This was tailed by their partners taking each other on with the viral wine glass race using a roll of toilet paper and a wine glass to pull the glass towards them as fast and effortless as they could.

For the second round, Blaqleng went head-to-head with Khosi & Miracle OP (Khosicle), where the pairs juggled balloons in the air with only two simple rules: keep all four balloons afloat at the same time while remaining in the designated square – the pair who held all balloons afloat the longest won the challenge.

Taking over from Khosi, Nelisa & Yemi Cregx (Yelisa) were announced as this week’s Tails and were told by Biggie that each will be given a white board to carry throughout the week. The two will have to write down anything they need to communicate with their housemates on the white board before speaking. To avoid any penalties, they must duplicate word for word what has been written on the board without adding or taking away any words.

Fans can vote for their favourite pair on dstv.com/bigbrothertitans and by registering on the site, as well as the DStv and GOtv Self Service Apps.

Catch Big Brother Titans live, 24/7 on DStv Channel 198 and GOtv Channel 29. Keep up with the conversation with the hashtag #BBTitans, visit dstv.com/bigbrothertitans, and follow @BigBroAfrica on Twitter, bigbro_africa on Instagram, and @BigBrotherAfrica on Facebook.