I am Not Aware of My Suspension from the NPP: Benjamin Katsekpor

He said he has not officially recieved any such letter 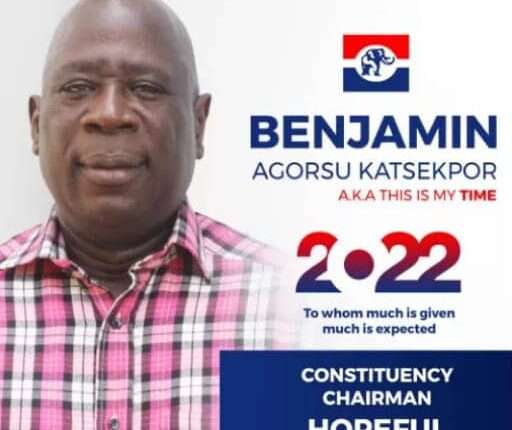 A leading contender of the chairmanship slot of the New Patriotic Party (NPP) in the Ketu South constituency, Benjamin Agorsu Katsekpor, has denied knowledge of his suspension from the party in the Constituency following a brawl that ensued between his supporters and other members of the party during the constituency elections on Sunday July 3, 2022, resulting in the cancellation of the polls.

According to him news of his suspension only got to him through a close associate who informed him of a certain communique circulating on social media purporting to be his letter of suspension coming from the regional executive comittee. He said he has not officially recieved any such letter.

Katsekpor said prior to the elections he and his team were reliably informed of a grand plan by the current leadership of the party in the constituency to replace names and pictures of qualified party executives / delegates from the electoral album with unknown persons to turn the outcome of the polls.

He alleged that these claims were corroborated by electoral officials who said the old album they had was replaced with a new one by the current leadership prior to the elections. He said the allegations got many members of the party agitated and so a number of them including himself and his supporters demanded that the album be shown to them for scrutiny to ascertain the veracity or otherwise of the allegations before the commencement of the polls.

The chairman hopeful said as a leading contender in the elections, he saw nothing wrong with the demands his followers were making and so threw his support behind them. He noted that the youth of the party became unruly and started exchanging insults when the election committee declined their demand for a display of the electoral album. Katsepor said he had to personally intervene to get the youth to return to order.

He therefore wonders why accusing fingers are being pointed at him for causing the misunderstanding that marred the polls that day adding that he is scandalised and unable to understand what went into the decision by the electoral committee to call off the polls, more so, when nothing untoward occurred after the exchange of words by the aggrieved youth.

He further wonders whether the NPP Volta regional Secretary had the power to single handedly call off a constituency election seeing that he is not even a member of the electoral committee of the party in the constituency.

Per Katsepor’s words, he received a phone call from the party’s regional secretary, Pope Yao Yevu, informing him of a summon by the regional disciplinary committee which he was to honour by Monday July 4, less than a day after the election was called off but he failed to honour the call because he thought the timing was too short, more so, as he was not officially written to.

Benjamin Katsepor says he suspected foul play by his enemies and detractors to thwart his bid to lead the party in the Ketu South Constituency as it’s chairman, a position he is contesting for the third time because of his unflinching love and dedication to the NPP in the constituency and the country as a whole.

Katsepor called on his supporters and all party faithfuls in the constituency to remain calm as steps are taken to resolve the impasse and to ensure that “we remain strong as a party going into the 2024 general elections”.