Ken Ofori-Atta to Resign: Adwoa Safo joins other NPP Members to call for his sack

...or vote with NDC MPs for his removal 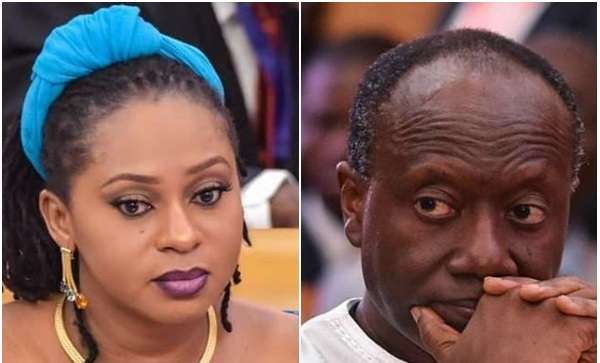 Ken Ofori-Atta is reported to have signed his resignation letter…

Will Akufo-Addo and his Closely-knit Akyem family accept the charge of guards at the Finance Ministry and risk the opening of the Pandora’s Box?

Dr. Nyaho-Tanakloe has said that the only reason Ken Ofori-Atta is refusing to leave office despite the public outcry for his removal is because he is covering up for President Akufo-Addo.

Will Ghanaians look on indefinitely or take on President Akufo-Addo for holding Ghana to ransom over his family members?

Ghanaians are demanding the resignation of the President Akufo-Addo-Bawumia government.

Dr. Bawumia must immediately resign as head of the Economic Management Team responsible for the current collapse of the economy and free-falling Cedi.

Akufo-Addo upon his return from his latest foreign trip, must tender in his resignation or risk Civil Action to rescue Ghana from his misrule.

Recall that Akufo-Addo predicted in the studios of Peace FM on Kwame Sefa Kayi’s Kokrokoo show that Ghana was going to experience an UPRISING given the conditions prevailing in the country which has worsened under his watch.

The police aware of the mood of the country, are desperately trying to protect the President and his government from the wrath of Ghanaians.

The police recently succeeded in stopping the AriseGhana three-day Picketing at the Revolution Square to demand Probity, Transparency and Accountability from Akufo-Addo and his Galamsey Economy Government.

Dr. Nyaho Nyaho-Tanakloe has said that the only reason Ken Ofori-Atta is refusing to leave office despite the public outcry for his removal is because he is covering up for President Akufo-Addo.

Dr. Amoako Baah and other NPP stalwarts in academia like Dr. Amakye-Boateng have all called on Ken Ofori-Atta to resign citing the hooting of Akufo-Addo in Kumasi as the last straw…

Instead Gabby Asare Ochere-Darko, Cousin and counsel for Ken Ofori-Atta has been attacking everybody demanding the resignation of Ken Ofori-Atta.

The Akyem Mafia Kitchen Cabinet of President Akufo-Addo are the only Ghanaians who want him to remain in office.

Ghanaians are saying;
ENOUGH IS ENOUGH.

Ghanaians are determined to use all legal and constitutional means to get the removal of the President and his efungongor government.

Ghanaians will not entertain any military adventurers who may decide to take advantage of the situation.

The Constitutional Rights to Assemble, Picketing and Demonstration will be pursued…

NPP BREAKS UP IN EIGHT DAYS: Gabby vs Majority Leader

COP27 Hypocrisy of Ghana: Akufo-Addo is a ventriloquist.