OFFINSO NORTH: Philanthropist bails-out Brilliant but Needy Student after She was Disappointment by the District Assembly

Science A1, English A1, Food and Nutrition A1, Management in Living A1, General Knowledge In Arts A1, Mathematics B2 and Biology B3. 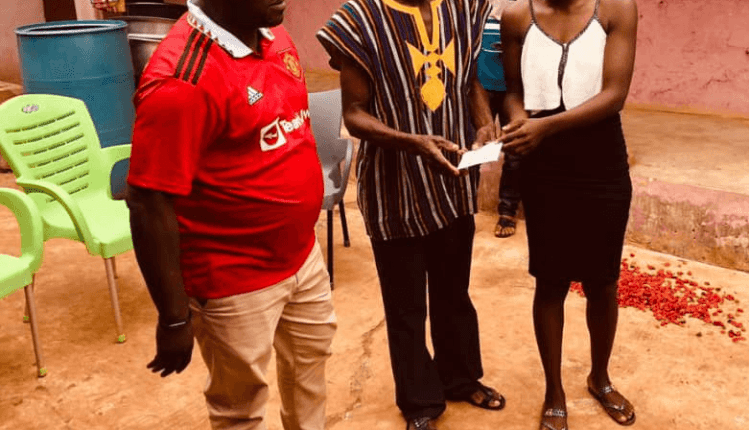 But for the timely intervention of a Philanthropist who is also a Businessman, Dr. Rockson Aduboahen, Theresa Kusi’s dream of becoming a Medical Practitioner in the future would have been shattered forever.

Theresa, an immediate past student of the Nkinkaasu Senior High School in the Offinso North Constituency in the Ashanti Region is reputed to have obtained the best grades and results in the 2021 WASSCE exams, thus emerging the best candidate in the constituency for that period.

Science A1, English A1, Food and Nutrition A1, Management in Living A1, General Knowledge In Arts A1, Mathematics B2 and Biology B3.

DREAMS ON THE ROCK

Subsequently, she gained automatic admission into the University of Health and Allied Sciences, Ho, Volta Region to study medicine. However, Theresa was hit in the face with financial constraints as her father, Stephen Kusi, a farmer, was not that financially sound to see his brilliant daughter through the educational ladder at that crucial stage.

ASSEMBLY JUMPS IN WITH FUNFAIR

According to Mr. Kusi, faced with this problem, he went with cup in hand to seek financial assistance to enable him see his daughter through. He stated that he sent words to the District Assembly, and the District Chief Executive (DCE)  for the area, David Asare organized a big rally at the Afrancho Police Station in honour of their proud daughter of the land.

According to the desperate father, the DCE, on behalf of the Assembly assured the gathering and for that matter Theresa’s parents that the Assembly was not only proud to be associated with Theresa’s success story but will also assist her throughout her educational ladder with full Scholarship. The comment attracted wild cheers and applause from the gathering.

The desperate Stephen Kusi stated that months after this, the Assembly issued him with a cheque for GH¢ 2000 i.e a quarter of the school fees.

He maintained that when he questioned them about their own promises, he was told that beneficiaries of such packages from the Assembly were many so that was how much they could afford.

DESPERATE FATHER AT WITS ENDS AS HE THINKS OF APPRENTICESHIP

Mr. Kusi indicated that, faced with this, he came to the end of his wits as he saw no way out for this daughter. Subsequently, he decided that apprenticeship would do for his daughter. According to him, Theresa’s elder sister, Gladys Kusi had just passed out of the Nursing Training College and doing her National Service. What is more, he still has one ward at the Jachie Pramso Secondary school.  As such, he was really at his ends wits this time round and not knowing what to do. He stated that he had subsequently banked the Assembly cheque, with the hope of getting something to top it up for Theresa’s apprenticeship. When MP was contacted, he denied notice of Theresa’s issue.

ADUBAOHEN COMES IN WITH BAIL OUT

Presenting  an amount of GH¢ 5000 to the family at Afrancho on  Saturday July 23, 2020, Dr. Aduboahen  pointed out  that when information got to him about Theresa’s situation, he was moved with pity to come in with his widow’s might to assist her.

He could not phantom how with such grades, Theresa should rot at home, or go for apprenticeship, when, if given the necessary assistance she could be of benefit not only to herself and parents, but also to the community and country at large.

Dr. Aduboahen pointed out that education especially that for the girl-child is prime to him. As such, he has a Foundation, “Aduboahen Foundation” to provide libraries and IT centers in the constituency. He said he will liaise with the parents on Theresa’s education throughout the four year period.

Expressing their profound gratitude to the philanthropist, Theresa’s parents indicated that they were astounded by Dr. Aduboahen’s gesture. While thanking him, for his assistance, they also prayed for him and appealed to other well meaning people to come to their aid. Obtainable on 0592938297/0206346714, Mr. Stephen Kusi stated that no contribution is too small.

Theresa, who could hardly control her tears, stated that she had lost all hopes of ever climbing up her educational ladder. However, with Dr. Aduboahen’s assistance, her hopes have been rekindled and she will do her best with it. She stated that her outstanding grades notwithstanding, apprenticeship would have been her lot.

“I am grateful to you sir,” the calm Theresa told Dr. Aduboahen.

Dr. Aduboahen also bailed out Snr. Ernest with 50 bags of cement towards the construction of a school he has started in the constituency. Our information is that Snr. Ernest, an Assembly man at the Offinso North District Assembly has been looking for assistance from all corners in this respect, but to no avail. Subsequently, this came as a welcome relief for him. Also, Dr. Aduboahen pledged support for the completion of the Mosque of the Muslim community which has also been looking for support in this regard.

GOT A STORY? Share with us. Email: [email protected] or [email protected] WhatsApp: +233(0)244822034
brilliantBusinessmanDr. Rockson AduboahenDreamNeedy StudentNkinkaasu Senior High SchoolOfffinso North District AssemblyOffinso North
0
Share FacebookTwitterWhatsAppTelegram
Subscribe to our newsletter
Sign up here to get the latest news delivered directly to your inbox.
You can unsubscribe at any time