According to the Movers of the motion, they relied on Article 82 of the 1992 constitution Order 106 of the Standing Orders of Parliament. 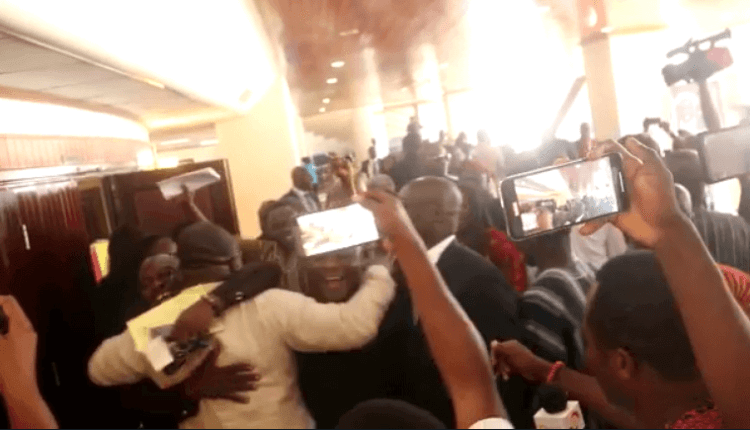 There was drama and the display of extreme partisanship in Parliament on Thursday, November 10, 2022 just before the commencement of official business of the day.

It all started when the Majority Caucus of the House was briefing member of the Parliamentary Press Corps (PPC) at an emergency press conference called over the issues of the motion to for the censure of the Finance Minister, Ken Ofori Atta. Addressing the Press, the Member of Parliament for the Effiduase Asokore constituency, Dr. Nana Afriyie Ayew, dissociated his side from a motion filed by the Minority Caucus seeking to censure the Minister for non-performance.

According to the Movers of the motion, they relied on Article 82 of the 1992 constitution Order 106 of the Standing Orders of Parliament.

But the Majority Caucus maintained that though some of them had earlier called on the President to remove the Finance Minister from office, they were not going to be part of this motion by the Minority on the motion for censorship moved by their colleagues on the other side.

No sooner had the press conference ended than a group of Members on the Minority side came in worrior songs like “y3 ni abri korrr”, “Y3n chele obiaa” among others. They also addressed the press where they denounced the stance taken by their colleagues on the opposite side. The Minority members could not understand the action of their colleagues, wondering whether it was not the same sizeable number of them (80), who a few weeks back called for the removal of the same Finance Minister.

The National Interest against NPP Interest

First Deputy Minority Whip, Ibrahim Ahmed, who addressed the media, argued that the Majority side was full of contradictions. He wondered whether it was the national interest or an NPP interest that they were seeking to serve. He argued that since it was a case of national interest, party interest should be done away with. He further urged his colleagues on the NPP side to bring in their views during the debate.

Minority leader, Haruna Iddrisu, in moving the motion catalogued a number of issues ranging from what he termed “the incompetence of the Finance Minister” to the rising cost of living.

The deputy Majority leader, Alexander Afenyo-Markin raised an issue of preliminary objection on the Motion but the Speaker objected to it. The secondment to the motion and matters relating to it were characterized by emotions, commotions and animosity on the Floor of the House.

Speaker Bagbin however referred the matter to an 8-member ad-hoc Committee to deliberate on the issues and report back to Parliament within 7 days.