Ghana beat the European country in Abu Dhabi on Thursday afternoon ahead of the opening game against European giant Portugal next week Thursday in Qatar. 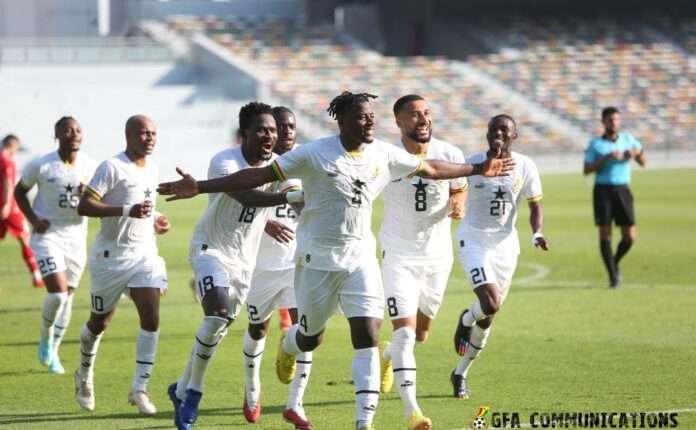 Ghana’s Black Stars produced a mouth-watering and a spectacular performance against the Rossocrociati of Switzerland with a 2-0 win ahead of the 2022 FIFA World Cup tournament.

Ghana beat the European country in Abu Dhabi on Thursday afternoon ahead of the opening game against European giant Portugal next week Thursday in Qatar.

Black Stars had the better of the Swiss as they controlled midfield of the game even in the absence of Thomas Partey and Mohammed Kudus.

Ghana were the better side in the first 15 minutes of the match as they controlled the middle of the field with swift passing.

Accra Hearts of Oak SC player, Daniel Afriyie Barnieh was the star of the first 45 minutes of the match as he wowed fans at the stadium and at home watching with scintillating display against the Swiss.

He was the first player to have a shot on inside the first half and he was a delight to watch throughout the the time he spent on the field with great display.

Switzerland came close to scoring themselves as they put pressure on the Ghana team on countless occasions.

Goalkeeper Ati-Zigi fumbled with an earlier cross into the box but made amends as the game went on.

The opening 45 minutes of the match ended in a goalless stalemate.

Noah Okafor nearly gave the Red Crosses the lead after he was put through on goal but his effort went over the bar.

After the recess, Ghana continued from where they left off in the first half of the match and continued being the better.

Ghana gained full control over the their opponents and finally got their reward by hitting the back of the net.

English Premier League side Southampton FC Center-back Mohammed Salisu scored the opening goal of the match to put Ghana 1-0 up on the 69th minute mark with a looping header from a corner kick.

Bristol City FC forward Antoine Semenyo got the second goal of the match after a brilliant solo run from Kamaldeen Sulemana.

Ghana got two good chances later in the game through Sulemana and Alidu Seidu but the goalkeeper Yann Sommer saved both efforts.

Ghana will play European giants Portugal on November 24 in their first World Cup game on Thursday.

Ghana will start their 2022 FIFA World Cup campaign with a game against European giant Portugal on November 24 at Stadium 974 in Doha.

Four days later, the Black Stars return to action with a clash against the Asian powerhouse South Korea at the Education City Stadium in Al Rayyan.

The Black Stars who are making their fourth FIFA appearance will end their group stage campaign with a clash against Uruguay at Al Janoub Stadium in Al Wakrah.

Keep your comments for now, let’s pray for the team to deliver – Asamoah Gyan tells Ghanaians