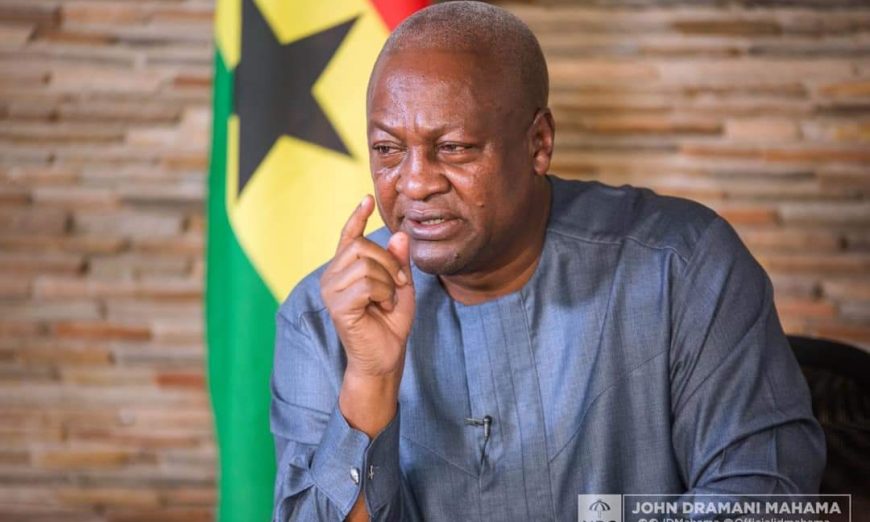 Presidential Candidate for the opposition National Democratic Congress (NDC), John Dramani Mahama has debunked comments of his critics to the effect that he will abort the Free SHS policy when given the opportunity to rule the country once again in 2021.

He said “people are saying I will collapse free SHS if I win the elections, it’s not true. Tell them they are liars I have not said so anywhere. The free SHS is a good policy we all agreed to do it,” he said.

He explained that in 2015 his administration began the with the day students not paying frees with the intention of adding the boarding students before he lost the elections of 2016.

According to him, though the policy was good a lot of thoughts and consideration should have gone into its implementation for example his government realized the need to provide the basic education infrastructure including dormitories, dinning hall to ensure the students learn in a congenial environment but unfortunately all these are absent making the Free SHS malfunctioning.

It is due to the lack of basic educational facilities tht he decided to construct 200 ultra modern brand new schools , with 123 giving to contractors who were able to complete more than 50 brand new 3 storey schools.
At the time the John Mahama administration lost the elections over sixty of the schools were in different shades of construction across the country. However the NPP under Akufo-Addo has abandoned the projects.

Speaking at a durbar of Chiefs and people of Gambia #2 in the Ahafo region as part of his “SpeakOut” tour the former President assured the gathering of his commitment towards ending the double track system and improving the free SHS when given the chance to rule again.

Mr. Mahama said “ I will make the Free SHS better by ending double truck and provide the infrastructure deficit.

“Snakes, Lizards, Cockroaches and Grasscutters are learning” in the Schools i built – Mahama