Communiqué: Evidence of a calculated Plan by Britain, Gold Coast and Collaborators in the Annexation of Western Togoland uncovered

To begin with, it is worth noting that B.O.B Gidden was also the UK's representative in charge of the Trusteeship matters of then British Colonies

To All Media Houses

Warm regards from the Communications Bureau of the People’s Liberation Council (PLC) Western Togoland and salutations for your usual cooperation and attention.

The PLC once again wish to draw the attention of the general public through your esteemed media houses about a classified document in it’s possession titled “National and Confidential” dated 29th October, 1954, clearly written, signed and dispatched to the British government by it’s then foreign secretary and leader of it’s delegation to the United Nations (UN) B.O.B Gidden.

To begin with, it is worth noting that B.O.B Gidden was also the UK’s representative in charge of the Trusteeship matters of then British Colonies. And a document of this nature emmanating from his office to his government, goes a long way to vindicate the PLC in our long held view of the illegal annexation, occupation and colonization of Western Togoland by Britain and her Gold Coast and UN collaborators.

Indeed a careful scrutiny of the said document reveals that there’s more to the Western Togoland “Big Question” than the world was made to believe all these while for which we at the PLC unapologetically maintain our stance as follows:

2. That JB Danquah thinks that Britain ought to be able to govern Western Togoland (British Togoland) by means of a UK high commissioner when the Gold Coast (Ghana) becomes independent through the machinery of the Gold Coast government. Gidden wrote that he believes Dr. Danquah’s objection to the ‘grand scheme’ although not stated will benefit the French government whereas Dr. Danquah will like the UK to be a buffer. Gidden further wrote that JB Danquah was bitterly opposed to the CPP (headed by Dr. Kwame Nkrumah), “the main collaborator whose party the CPP was used to foster the agenda of the annexation of Western Togoland. The Memo further revealed that Dr. JB Danquah insisted that B.O.B Gidden should personally take up the Western Togoland issue with his government, with Gidden concluding that he is not giving the impression that Dr. Danquah is likely to be active in discrediting either the British government or the gold Coast but because Dr. Danquah knows a lot of people and chances are that he would be consulted on the matter.

With these excerpts from the document, the PLC is further convinced that there was a calculated plan to annex Western Togoland by Britain, Ghana and their Collaborators otherwise there should be no fear on the part of the British government as to the fate of Western Togoland. The fact that one of the independence leaders of the Gold Coast in the person of Dr. JB Danquah had issues with the British regarding Western Togoland leaves much to be desired in that the question of Western Togoland is not and can never be a figmentation of the imagination of its people as being churned out by some ignorant people who happen to find themselves in the corridors of power in today’s Ghana but a true and legitimate story which has over the years been skewed for selfish and parochial interests of some unscrupulous people.

The fact also that one of Ghana’s own patriots, Dr JB Danquah knew of and raised concerns about the Western Togoland issue with the British government should inform every descerning Ghanaian and Western Togolander that there’s more to the Western Togoland Question than meets the eye. The PLC maintains that the evil agenda against Western Togoland was orchestrated long before the infamous plebiscite of May 9, 1956. We finally wish to use this platform to reiterate our calls for the government of Ghana to take the necessary constitutional and democratic steps to restore the freedoms and liberties of the people of Western Togoland and to implement the UN resolution 1044(XI) that established the Union between the two nations, Ghana and Western Togoland for a peaceful coexistence and accelated development for both nations.

God bless you all. 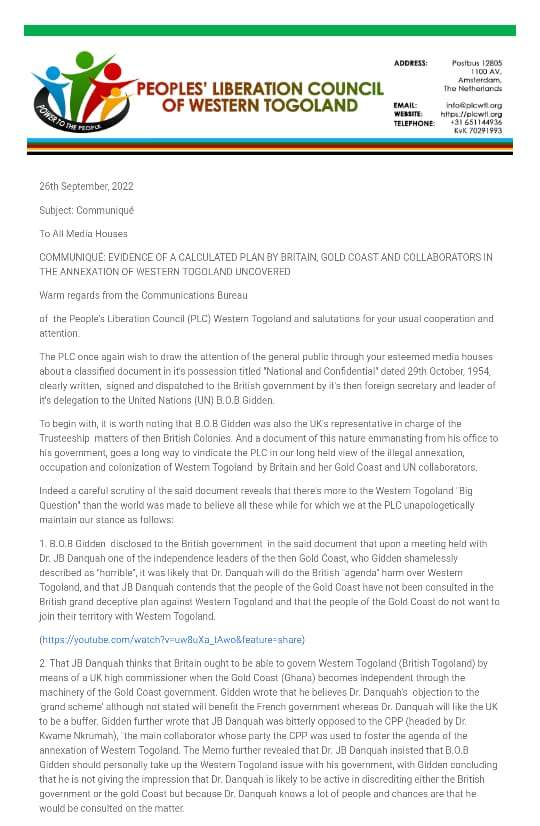 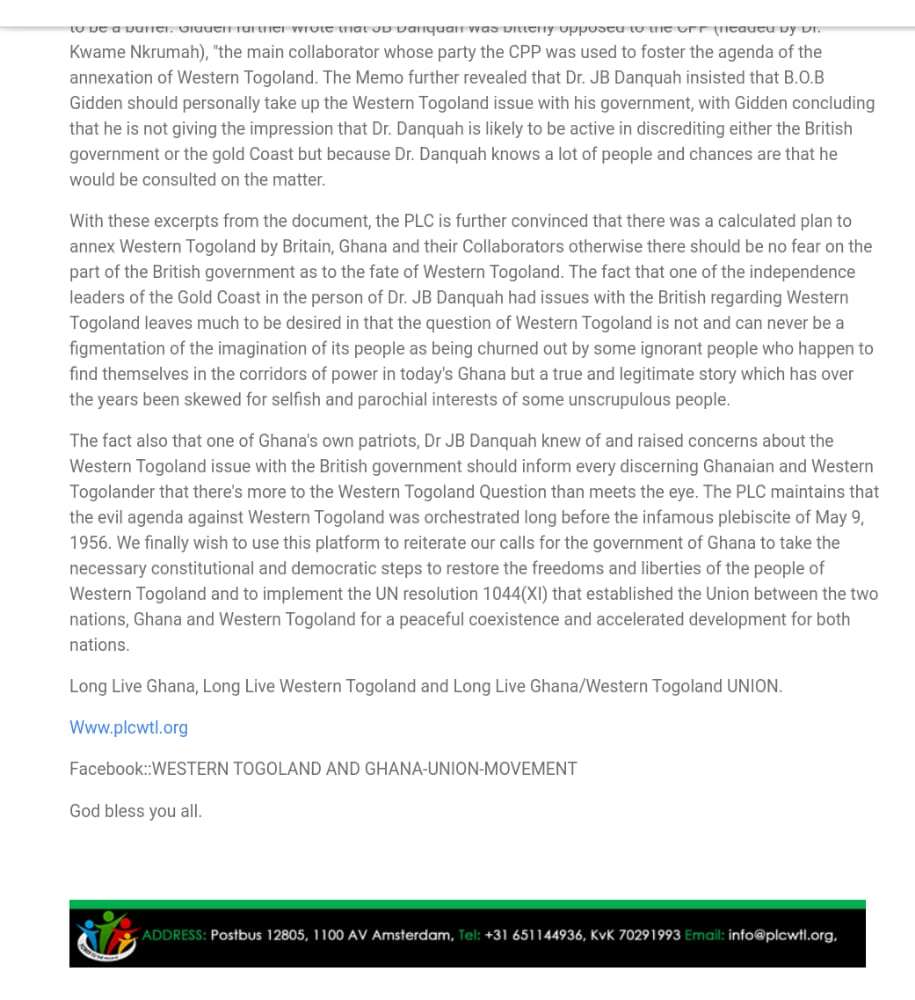 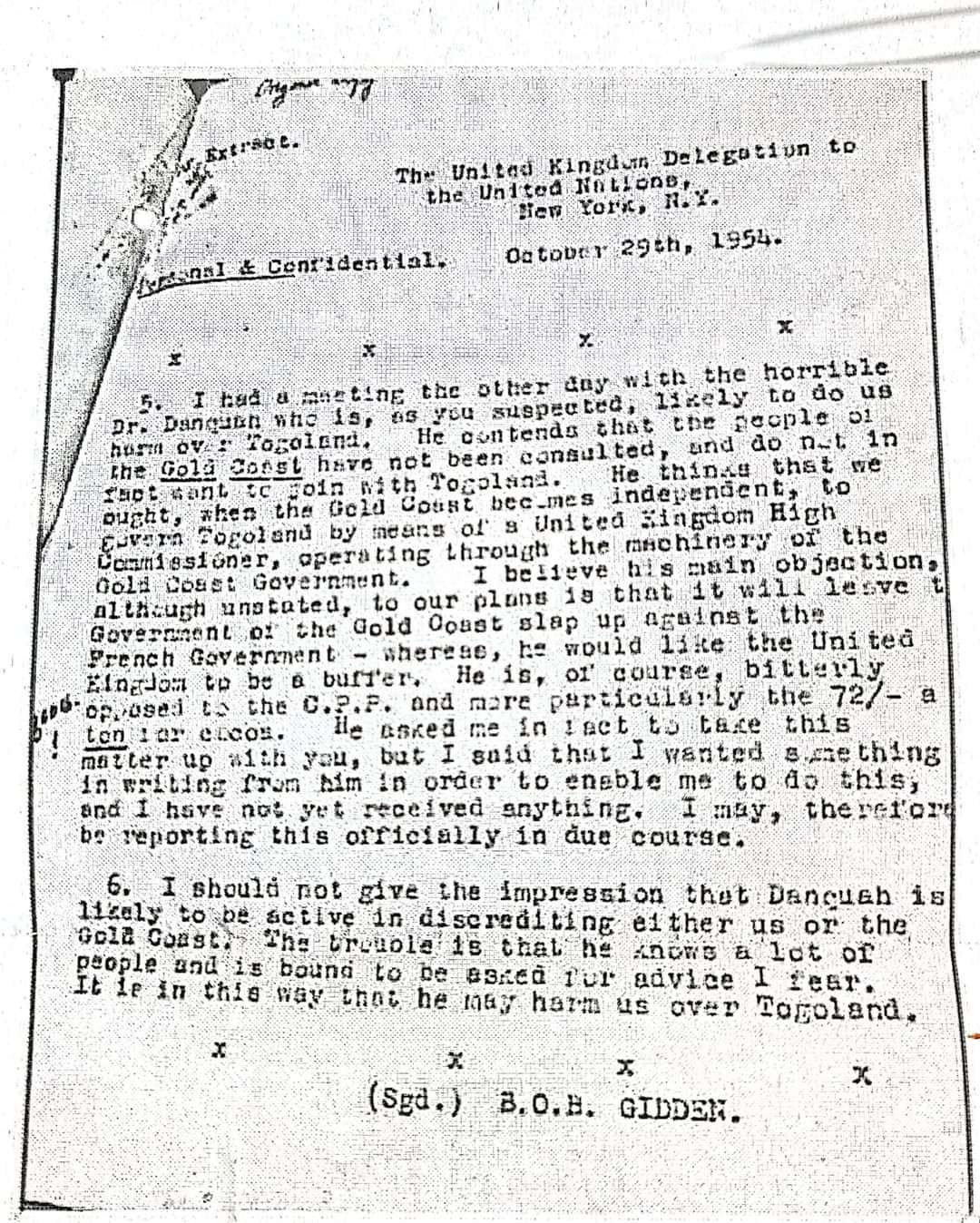 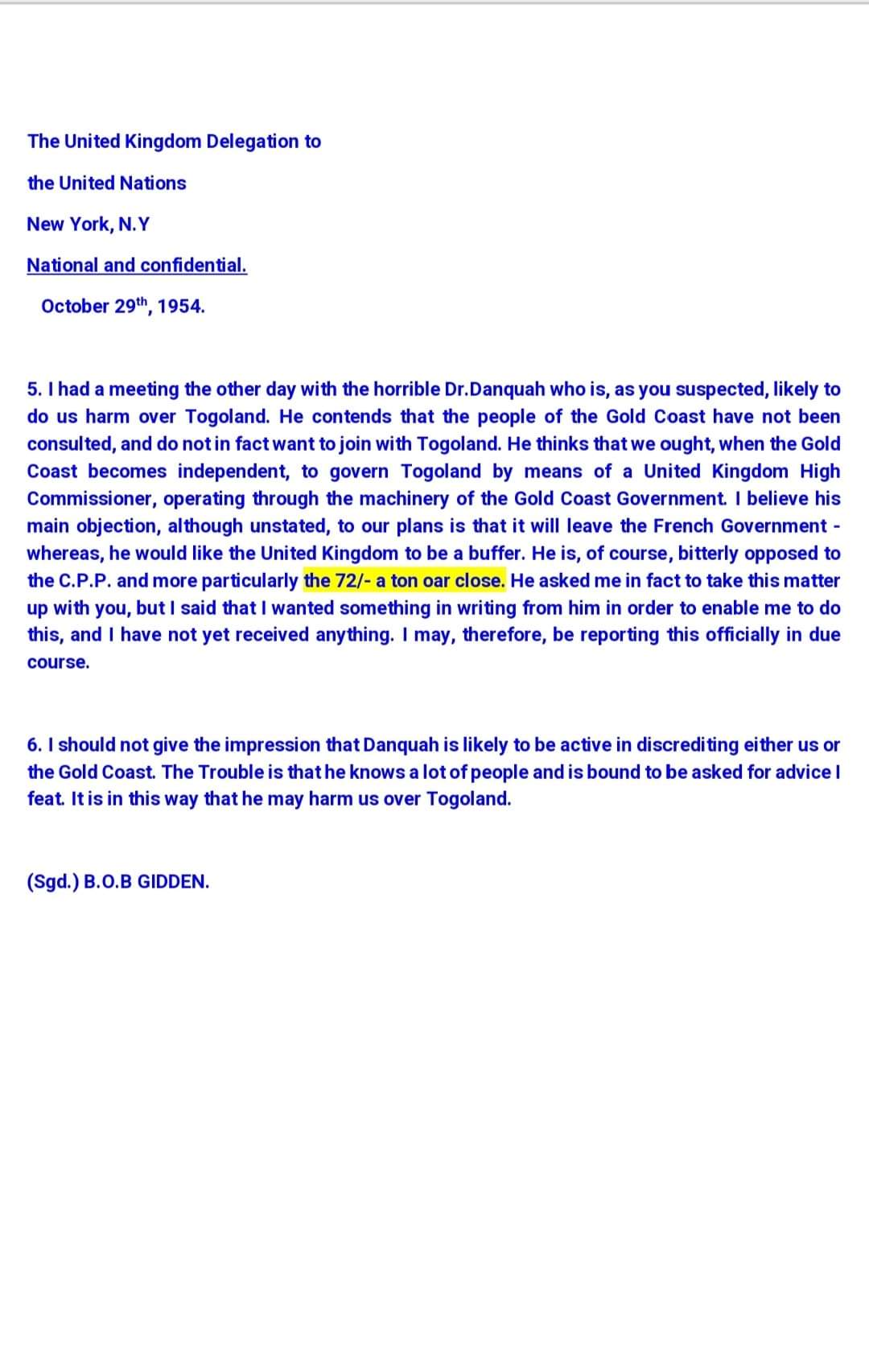