How I escaped death – Uzoma Ahamefule

Approximately 15 minutes after leaving my house, the devil struck, and my pain, agony and tribulation began, and my life was in danger. What happened? 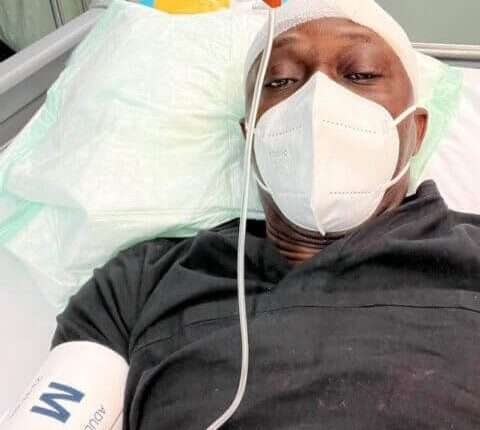 The plans of the enemies for me to begin a journey of no return or to forcefully send me to my ancestors and lower me six feet but failed woefully began in the early morning of Friday, the 5th August 2022. I had gone to bed the night before around 10:30pm, having prepared what I would wear, and setting my alarm to wake up at exactly 5:25am. But unfortunately, I woke up much earlier. The Friday weather was expected to be around 40 degree Celsius according to the forecast, and I took it with mixed feelings. Firstly, I did not like it because it would be too hot, but again I was happy and excited about it because I would be going to work with my E-scooter – enjoying the fresh air and nature, so I had thought. My earlier arrangement on this day for my shoulder therapy had been cancelled. At this juncture, it is important to note that I was just equally recovering from a sickness that had scared my family and me to the marrow.

After my routine activities of preparing for work that morning I still had enough time and was very happy. I was because I had always wanted to write an article to question the rational behind the Independent National Electoral Commission’s (INEC) decision to end the voters’ registration exercise too early when it was obvious that millions of Nigerians across the nation were still struggling to get themselves registered and would be disfranchised, but time never permitted me. So, I took this time as an opportunity and started the article that morning. I had hoped to finish it in the evening. And at about 6:45 am I left my house, hopped on my E-scooter and went to work.

Approximately 15 minutes after leaving my house, the devil struck, and my pain, agony and tribulation began, and my life was in danger. What happened?

I was on my E-scooter going towards the city center, precisely on Gersthofer Straße in 18th district, and cars were coming opposite my direction. I had just passed a zebra crossing, and I saw a car coming. I must be very honest, there was no threat of any kind because the driver was not on a high speed and neither was I. He was on the opposite lane, so there was no danger. But then, the devil took control, as the driver suddenly turned left to enter the street at my right hand side. I saw him and I shouted, but everything happened so fast and the absent-minded driver nocked me down, and I was in mortal danger.

I cannot remember exactly all that happened after I was knocked down and was lying helplessly on the road, but I remember that I was on the ground holding my head – it was like water was boiling inside it. Suddenly blood pumped from the left side of my head and I held that part strongly – I had a lacerated wound. According to the ambulance report, the blood I lost was about half a liter. I gave someone my phone to snap photos for me. I can also remember that the driver was telling me sorry, and was apologizing continuously that it had never been intentional, and that his mother had been lying in hospital. I also remember telling him that it was okay, and that it was an accident that could have happened to anyone. I begged him to please call the ambulance and that I don’t want to die. And he replied that he had already done that. A very nice man he was, and I wish to meet him one day. I also remember someone asking me about my address, which I got to know later that he was a policeman. I think that I was wrapped with an emergency foil and was air supported with oxygen in the ambulance that took me to the hospital. Every other thing that happened, I cannot remember. It was from the statement the driver gave to the police I knew that immediately he had hit me, I had flown to his windscreen before landing on the ground

In the hospital most of the things that happened seemed like a dream to me. I guessed that I interacted with the doctors and nurses by answering their questions, but whether I was sound in my responses is what I cannot tell. But at a point, I came back to my full senses, and I was consciously aware that I was in danger but did not know exactly where I was. I then asked, and I was told that I was in AKH, the general hospital in Vienna. I remember that I also vomited. My blood pressure was scarily very high. Almost every part of my body was not spared, with serious injuries and bruises, but luckily no bone was broken. 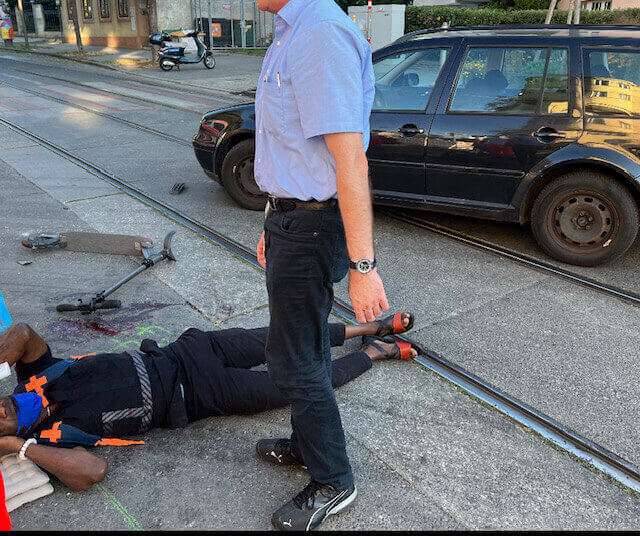 Since the accident I am still at home. Nevertheless, God is still on His throne, and in absolute control. He has never abandoned me, as I am responding to treatment and recovering well. The major known issue I am having right now as a result of the accident is heavy pain deeply from the right side of my buttock down to my heel, and as a result, I cannot stand up and stay up to five good minutes without feeling severe pain. My blood pressure is still high and I never had a high blood pressure in my life until the accident. I am still feeling pains in my left wrist and my left ankle. Other wounds and bruises have all healed.

What happened to me on August 5th has happened to many who had planned what they would do when they come back home, had bidden goodbye to their families or loved ones and left, but never actually returned to tell their stories.

2022 has been a year of tribulations and worries for me and heavy emotional pain and trauma for my immediate family because of dreadful accidents that have happened to me and what seemed moments of states of hopelessness of my health from diagnoses, and suspected threats to life sicknesses that always miraculously turned out not to be so. The background of the trouble and the terrifying moments started on January 3rd 2022 – three days after successfully and quietly celebrating our mother at 95 – when a bottle of Pepsi fell off from up, broke and a part of it sharply cut my trouser and deeply slashed my flesh – at the village in my house in Nigeria. I will leave that for another day. But it is over. I am a conqueror. Please join me to thank God for sparing my life and giving me another chance to live.

To all those who use E-scooters – that I can never use again – or bicycles, please make it as a point of duty to always wear a helmet for your protection – whether one is under compulsion by law or not. I nearly would have died for not wearing one.

By Uzoma Ahamefule, the survivor writes from Vienna, Austria.