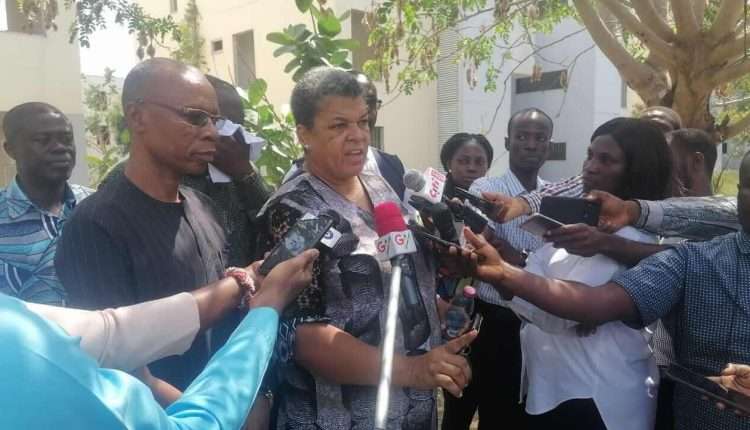 Minority side in Parliament has strongly opposed a proposal by the Minister for Works and Housing, Francis Asenso-Boakye to sell off the Saglemi Affordable Housing Project to a private developer.

They have vowed to use every possible means in Parliament including a vote of censure against the Sector Minister to ensure that the Government does not carry out its intentions of disposing off this national asset to its cronies in the private sector.

Addressing the media at the project site, the Ranking Member on the Committee, Vincent Oppong Asamoah, indicated that, contrary to claims by the Government, the project is still very viable. He said the project has been deliberately neglected by the current government to deteriorate so that they can dispose it off to one of their cronies.

He said, “I tell you; Members of Parliament will be very happy to live around this place. The environment is so serene so we came around for you to know that this Government has neglected it and they have caused so much financial loss to the state and the people of Ghana.”

The Saglemi Affordable Housing Project was initiated in the year 2012 by the erstwhile National Democratic Congress (NDC) Government of former President John Dramani Mahama. The intention was to build about 5,000 housing units for Ghanaian workers, out of which 1,500 housing units have already been constructed. But the exit of the then government, in 2016, caused the discontinuation of the project, as the new government claimed it had cited some elements of corruption by the previous administration.

Last week, the Minister for Works and Housing, Francis Asenso-Boakye, at a media engagement event at the Ministry of Information, dubbed, Meet the Press Series, revealed that Government has decided to sell off the project because it was no longer ready to pump in more funds.

“Government has decided to – Explore the possibility of selling the Saglemi Housing Project, covering the 1,506 housing units, at the current value to a private sector entity to complete and sell the housing units to the public, at no further cost to the State,” Asenso-Boakye said.

According to him, an amount of USD 196 million has already been sunk into the project so far, but Government is unable to find an additional USD 46 million needed for the fixing of storm drains, electricity and water at the site and therefore would want to offload the project “it is no longer viable”.

However, Minority Members on Parliament’s Committee on Works and Housing, are seeking the support of the general public to put pressure on the Government to find the resources to complete the project so it can remain affordable for Ghanaians.

This was after they took members of the Parliamentary Press Corps (PPC) on a tour of the project site on Tuesday, November 22, 2022, where it was observed that, though the concrete structures were in perfect condition even after it has been neglected over the last six years, all the fittings in the building, including, electrical cables, telephone wires and louver glasses have been burgled and, in some instances, destroyed.

The MPs on the Minority side of the Committee have served notice that, any potential investor who will pump money into the project will lose it at the end because a future NDC government will ensure that it takes back the project.